If there are two players, $i \land j \implies U_i(s_i,s_j) \land U_j(s_j,s_i)$. Note that discussions of utility and strategy choices always take the player in perspective as the first argument and the other players are subsequent arguments. 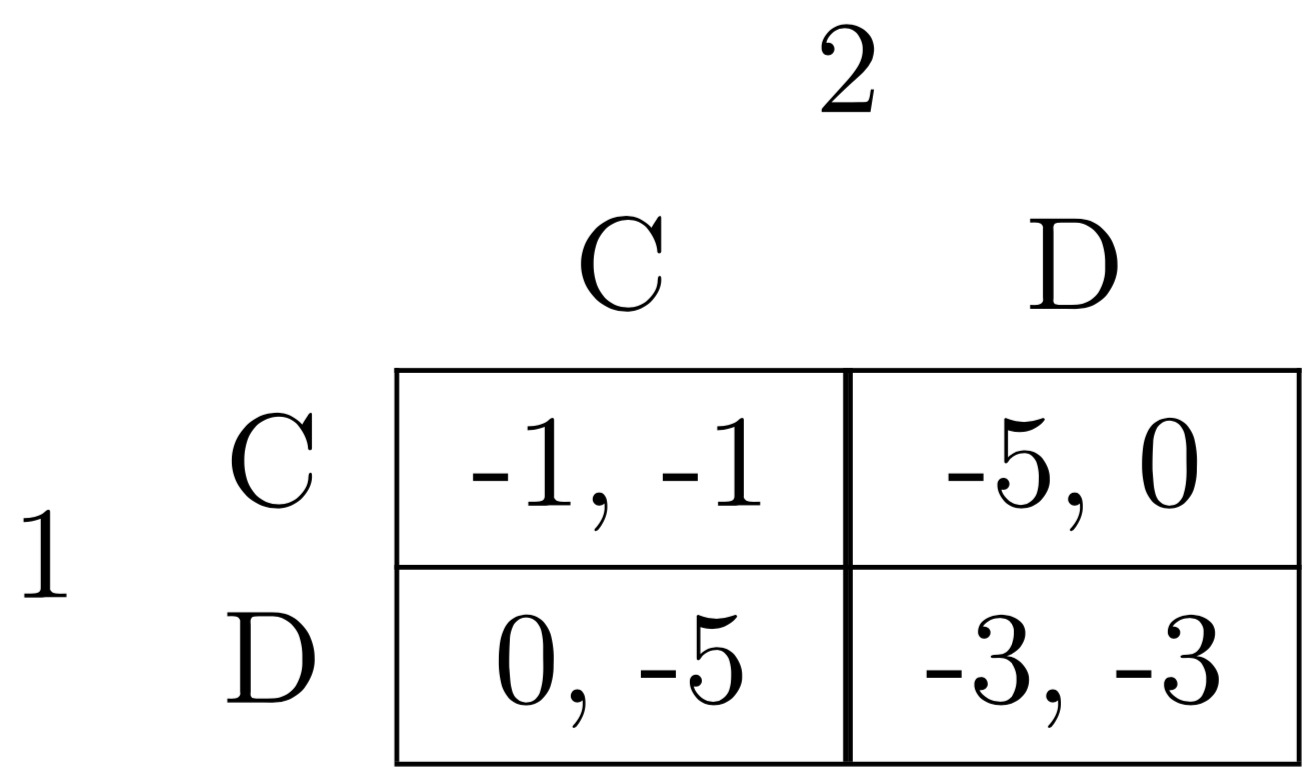 Suppose that you are Player 1. You will make the following call:

We can see that for both players, their dominant strategy would be (D,D). However, this strategy is Pareto dominated by another strategy, (C,C). This is a direct counterexample to the previously Adam Smith’s First Welfare Theorem which suggested that com- petitive markets intrinsically tended to the efficient allocation of resources. However, this is not the case in the Prisoner’s dilemma, where the efficient allocation (Pareto dominant) would be (C,C)

However, we can solve the prisoner’s dilemma through a few possible solutions:

Suppose there is a modified prisoner’s dilemma as follows:

Consider the modification to Player 2’s defect scenario as a cost of defecting. Note that for Player 1, nothing changes and defecting will still be his best strategy. However, we adjust Player’s 2 perspective as follows:

A belief of a player $i$ is a probability distribution $\sigma_j \in \Delta(S_j)$ that assigns probability $\sigma_j(S_j)$ to a strategy profile $S_i$. Essentially, you are assigning a weight to the chance of you playing a certain strategy. Given the beliefs, expected utility from $S_i$ given $\sigma_j$ is defined as:

If this condition is satisfied, $BR_i(\sigma_j)$ is the set of best responses to $\sigma_j$.

Taking another look at our modified Prisoner’s Dilemma from earlier:

Therefore, we have the following best response:

Relationship between Dominance and Best Response

Is there a relationship between strictly dominated strategies and best responses to a set of beliefs?

If $s_i’$ is never a best response, it is strictly dominated.

This question is difficult to answer but an answer can be shown in the following example.

We see that $M$ is never considered a best response. However, M is never strictly dominated in this game. Consider a mixed strategy by player B chosen by a coin flip s.t.:

If $S_i$ is not a best response, then it is strictly dominated [possibly] by a mixed strategy.